Coinciding with its LFW Unique runway show on 14 September, Topshop is launching its most democratic, ‘socially accessible’ fashion show to date. Not least as the results will be seen live and direct in a specially commissioned ‘digital mosaic’ window installation at the Oxford Circus store, created by one of my favourite creative duos Hellicar & Lewis. 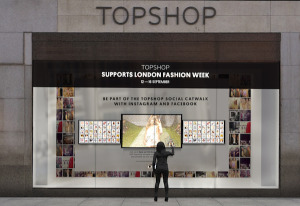 Via partnerships with Facebook and Instagram, this phygital window display will livestream social content from the LFW Topshop show space in Kings Cross to passersby and online followers of the hashtag #topshopwindow.

Five popular Instagrammers as well as show-goers snapping streetstyle or selfies will be feeding into the window’s pixelated content, that can also be manipulated by waving or gesturing in front of the window at the Oxford Circus store.

Dover Street Market celebrates 10 years of avant-garde designer creativity this month, and with it comes a brand new social media strategy. After a decade of curating and experimenting with fashion’s great, bold and new, the original luxury department store has launched a visual-language focused Instagram account to tie in with its big anniversary campaign for AW14. It’s a significant digital move for the social media shy retail brand that now operates stores in London, New York and Tokyo. The Insta posts are guest edited this month by Another magazine’s digital editor Laura Bradley and champion a continuous creative aesthetic that offers followers one eye on the physical store and one on the overall creative vision. The perfect hybrid of past and future, summed up by the new hashtag: #TheNextTenYears. 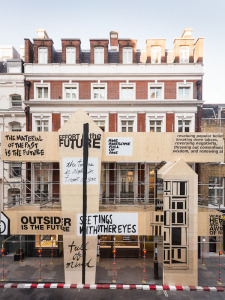 The physical celebrations in-store are worth a visit too. I love the pop-up market stalls, selling DSM branded trinkets and collectibles that are dotted throughout the five floors. Highlights of this season’s Tachiagari seasonal updates include new concepts by Simone Rocha, Loewe, JW Anderson, Sacai and a new Nike Lab with exclusive kicks. There’s the first overseas outpost for the CDG Good Design Shop, full of utilitarian homewares and vintage collection classics from the Comme archive. Louis Vuitton and DSM collaborated on the luxury brand’s first ephemeral boutique (new word for pop-up?) to showcase Nicholas Ghesquiere’s first collection for the house.

Thankfully founders Rei Kawakubo and husband Adrian Joffe have addressed the age-old problem of what to do about changing rooms with some truly amazing collaborations. There are giant walk-in ‘drop-boxes’ designed by Peter Blake, SC Artroom Milan and Christian Astuguevieille, who’s Waterfall box is covered in large white and yellow rope tassels for pure decadence. 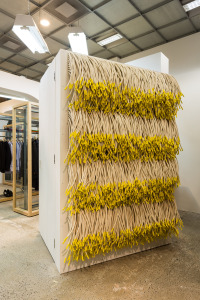 The World of Rick Owens at Selfridges

Another celebratory collaboration in London comes from US designer, Rick Owens, who is currently visualized in giant torso form above Selfridges iconic entrance. You can’t miss the 25m statue complete with flame-lit torch, created by Doug Jennings and installed to mark Owens’ 20th anniversary as a designer.

The department store has launched The World of Rick Owens in its WonderRoom concept space on the ground floor and associated Orchard Street windows. The space is a fetishistic ode to Owens, that has more of an exhibition mood than simply retail. There is a pulsating LED screen on one wall – an installation by Japanese artist Ryoji Ikeda – that combines light and audio frequency for an immersive experience. There are also books, films and music curated by the designer on display, alongside the 20-piece collection that has an ‘elemental’ theme according to the designer. 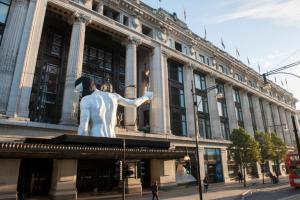 But it’s the tech-infused, thematic windows that I love in particular. The corner window includes two flat screens projecting the Rick Owens brand name in flames, set against a black staircase where fog is pumped out towards the top, for an eerie and sinister feel. 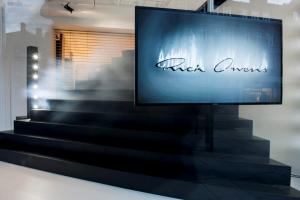 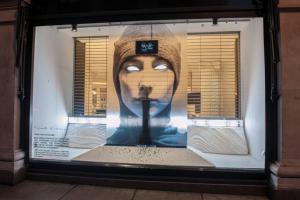 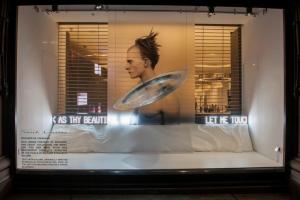 Owen’s other windows take inspiration from the 1923 silent movie of Richard Strauss’s opera Salome. One features a model, Terry Ann as Salome with back-lit slits for eyes and a steady stream of black ink pouring from her mouth, while scenes from the film are played across her forehead. Nextdoor is a picture of another character from the film, Edouard as Jokanaan, whose head will end on a silver platter for the ever demanding Salome. The windows are a reference to the new Everyman Cinema that Selfridges has just launched and where Salome will be playing later on this month.

Rick Owens, Master of the Elements, is one of twelve iconic designers contributing exclusive designs as part of the store’s major AW14 marketing campaign, The Masters. I love the other-wordly and specially commissioned film by Marie Schuller for SHOWStudio, that comprises a collection of vignettes that portray the different designers’ universes, yet are visually connected. Watch it here: SHOWstudio X Selfridges – The Masters by Marie Schuller.

Jean-Paul Gaultier is another designer celebrated in The Masters line-up at Selfridges. An elaborate Selfie Station created by retail set-designer Gary Card is billed as a digital experience for customers who wish to share the JPG space-age theme for his Master of Expression collaboration. The NASA-inspired station features a moon-buggy that projects images of visitors to multiple screens that are instantly sharable on social media. 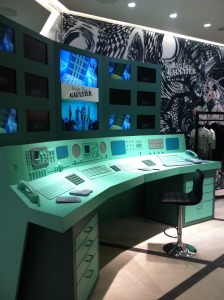 Harrods has opened London’s largest shoe department (officially swiping Selfridges’ crown) and while it’s not a digital environment, it is giant in scale and more like a huge mall full of shoes up on the fifth floor. Use the Harrods in-store navigation app to find your way around (it’s that big). There are dedicated boutiques for a host of luxury footwear names from Giuseppe Zanotti, Christian Louboutin, Charlotte Olympia and Manolo Blahnik even has an exclusive staircase to his private suite-style salon.

To help drive footfall Harrods has launched a digital campaign via a fun mobile game called Stiletto Wars (think CandyCrush meets a never ending Kurt Geiger lookbook), downloadable through the Harrods mag-tail app. Fastest footwear matchers can send their scores to a leaderboard to win prizes including gift cards and VIP shopping experiences at Harrods. The best bit is that the game will feature in a giant interactive screen in the store windows on Brompton Road until the end of September.

Opened earlier this year, the Karl Lagerfeld flagship on Regent Street is one of the best examples I’ve seen of digitized changing rooms. Yes, it’s a #selfie-based idea but this is where a simple execution works the best.

iPads are placed on the wall in each changing room with an image of Karl himself taking your photo. Obviously customers press the camera button. Et voila, the selfie phenomenon working hard for a brand and playing into the favourite pastime of its core millennial audience – sharing content across social media. There are screens dotted around the store to display look book images and add to the general digital feel to the store. 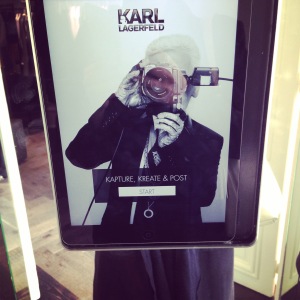 The iPads are not to encourage selfies, says Candice Collomb, Karl Lagerfeld’s digital manager. ‘The purpose of the iPad is to create a digital experience in the store, and encourage our customers to share their outfits and talk about their time in the store on their social networks,’ she told me. ‘There is a photo booth in the changing rooms, it’s fun and entertaining. Customers love experimenting with it, they play with the different filters and share images with their community,’ she says. One of the most popular digital elements is the guest book, where customers can message Karl and ask for advice or submit entries for ‘pic of the week’. ‘Technology plays an important role in the store. It is used to increase brand visibility on social media and helps to create a strong bond between the consumer and sales person,’ says Collomb who adds the data is stored via cloud technology and ‘heightens the feeling of being part of a ‘club’ for customers and the sales team’.

While you are on Regent Street make sure you download the dedicated shopping app that links your smartphone into the street’s new beacon system, that uses low-energy bluetooth technology for close-range connections. It can recognize when you are near a favourite shop, and send personalized promotions. Much has been said about beacons transforming the retail landscape, and if you take the time to swipe yes or no for your preferred brands (Tinder-style) then you only get push notifications for stuff you are interested in.

For the full-on luxury beauty brand experience head to Covent Garden. The tourist shopping haven has become the go-to retail destination for luxury brands to open dedicated beauty emporiums – I’m talking about Chanel, Dior and Burberry, that all opened in the Plaza central area. These bijou boutiques are aspirational brand statements where Millennials flock to try out their favourite luxury brands’ latest nail, eye, cheek and lip colours – at prices they can afford. 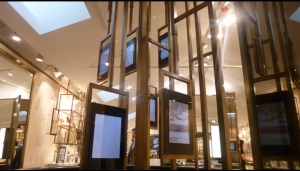 Talking of appealing to Millennials, this trio of stores are digitized to the hilt and scream Insta-ready photo as soon as you walk in. At Burberry there are colour coordinated iPads organised as a central chandelier, while at Chanel fun gif-style animated videos play on screens above the beauty bar and at Dior it’s interactive mirrors that grab your attention as soon as you walk in. 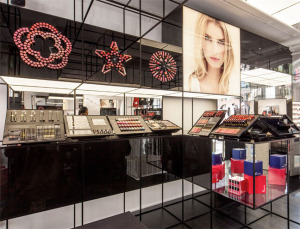 Only Opening Ceremony was man enough for the job of hosting a multi-brand designer store at the new Ace Hotel, Shoreditch. Tapping into the local zeitgeist and inspiring global hipsters with culturally relevant, creative products are shared brand values for both retailer and hotelier. So this partnership is an intelligent pairing, not to mention symbiotic. 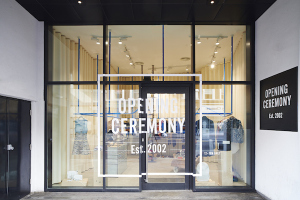 The pop-up OC space is located just next door to Ace Hotel and its locally run florist, coffee shop, juice bar Hoi Polloi restaurant and collaborators’ design shop. Designed by RCA alumni Max Lamb, who took a suitably brutalist design approach to the interior and flexi fittings, there are Lamb’s signature touches of raw materials and hand-crafted design elements throughout the small space. For the hipster fashion offer, OC has chosen a handful of local London designers (currently enjoying New Gen status at LFW) – including Marques’ Almeida and Faustine Steinmetz as well as international names such as Kenzo and Maison Martin Margiela.